Taking a Biblical look at what a father should look like and the role fathers have played.

2 Abraham was the father of Isaac.

Isaac was the father of Jacob.

Jacob was the father of Judah and his brothers.

3 Judah was the father of Perez and Zerah (whose mother was Tamar).

Perez was the father of Hezron.

Hezron was the father of Ram.

4 Ram was the father of Amminadab…

Everyone Has A Father:

But when he heard that Archelaus was reigning in Judea in place of his father Herod, he was afraid to go there. Having been warned in a dream, he withdrew to the district of Galilee,

Principle: We get our DNA from our fathers.

Principle: We have natural DNA and spiritual DNA.

Don’t just say to each other, ‘We’re safe, for we are descendants of Abraham.’ That means nothing, for I tell you, God can create children of Abraham from these very stones.

Principle: God can raise up children from unlikely places.

Principle: God will raise up spiritual father‘s for those that need a father.

The Disciples were Fathered:

A little farther up the shore he saw two other brothers, James and John, sitting in a boat with their father, Zebedee, repairing their nets. And he called them to come, too.

Principle: You can’t be discipled without being fathered.

15 For even if you had ten thousand others to teach you about Christ, you have only one spiritual father. For I became your father in Christ Jesus when I preached the Good News to you. 16 So I urge you to imitate me.

Principle: We all have a place in our life that has to be filled by a father.

21 A little farther up the shore he saw two other brothers, James and John, sitting in a boat with their father, Zebedee, repairing their nets. And he called them to come, too. 22 They immediately followed him, leaving the boat and their father behind.

In the same way, let your good deeds shine out for all to see, so that everyone will praise your heavenly Father.

Principle: We must live our life in a way that it puts the attention back on the Father.

Principle: When we spend time with a father, his attributes are imparted to us.

Principle: Be careful who you let father you.

Principle: The greatest thing a father can give is his time.

The Father Rewards Us:

…for he who comes to God must believe that He is, and that He is a rewarder of those who diligently seek Him. 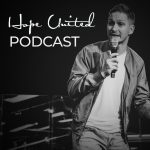 Hope United Church
The DNA of a Dad